Spicing it up at the Sydney Tea Festival

There are not many things I like more than tea, so when the Sydney Tea Festival comes to one’s neighbourhood (okay, it was five suburbs away, but that’s pretty close) you bet your arse I’d be there all day.

Due to a quirk of the calendar, the inaugural Sydney Tea Festival in 2014 went ahead without me. I was in London at the time, attending LonCon (the 2014 Worldcon), where I could simultaneously express my love of speculative fiction and writing. Writing (plus travel) is pretty much the only thing that trumps my love of tea. But this year I resolved to stay in Sydney and drink. It has nothing to do with the fact that Sasquan (the 2015 Worldcon) is in Spokane, Washington, and everything to do with the fact that I can’t afford to go.

At the shiny dawn of 8.45am (… so I’m usually a late riser), I stepped into the hushed hangar-like marketplace at Redfern’s Carriageworks. Having walked from Macdonaldtown Station, I encountered Love Tea immediately after buying my trusty $4 tasting cup. Regular readers will already know I fancy its French Breakfast, which I first encountered at Newtown Festival, then stocked up on at the recent Aroma Festival, but did you know the founders also have a penchant for Japanese tea? Damien brewed up Love Tea’s new Kukicha (which I at first misheard as ‘cookie chai’), a soft green tea made from tea stems.

While I was introducing myself to Damien, David Lyons of 18ThirtyFour happened by (he hosted the Introduction to Tea workshop) and we had a chat. The rest of the morning proceeded in a blur of rushed hellos and quick chats with acquaintances as people began pouring in. Shout out to Anne McWilliam of Blossom Blends, who owns the Sydney Tea Tastings Meetup group I run, as well as festival organisers Renee from Perfect South and Corinne and Amara from The Rabbit Hole Organic Tea Bar.

I had my morning sustenance (aka a Nutella crepe) and met up with a couple of friends, then proceeded to methodically visit each stall to note their offering.

Overall I felt the dominant note of the festival was chai, not just because of the number of chai-only specialists (Chai Walli, The Chai Room, Sticky Chai, Hari Har Chai) but because every other stall with an Indian tea in stock and/or a tendency towards herbs and spices seemed to be offering chai samples. 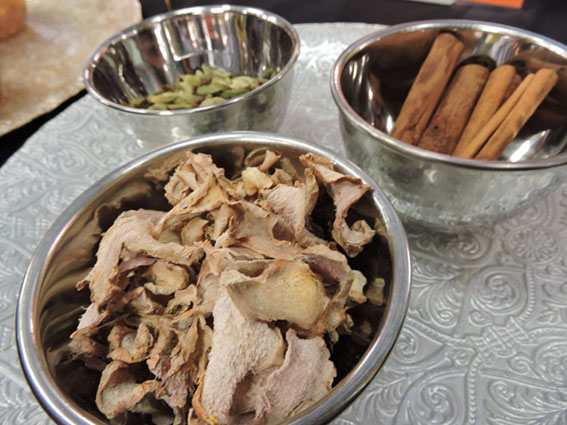 Spices at The Chai Room stall

I’m wondering if this indicates an immaturity in the market; with its strong flavours and hot milk base, chai is the logical step towards converting coffee drinkers to tea. It could also be due to the time of year the festival is on (August = winter) as chai is a great fortifying drink and the absence of iced tea was certainly notable.

I ended up having just one tasting of chai, from Chai Walli. Having said that, my biggest regret is not buying a slice of chai cake from her because it sold out by the time I was ready for it.

When I reached Love Tea again, a couple of hours later with friends in tow, I convinced Damien to serve up kukicha and French Breakfast instead of chai. “They’re two teas you have that no one else has and they’re probably your best teas. Don’t compete with everyone else.” Ha! Hoping to shill myself as a consultant next.

Another prominent theme this year was the proliferation of healing teas offered by herbalists, naturopaths and other allied health specialists. I’m not a big herbal fan (it’s not tea) so I found it easy to skip those products, but I thought it was interesting that that was the selling proposition of many brands and the angle a lot of other stalls chose to promote.

This also came through in the workshop schedule where Tea Meditation and Spring Detox were two of the sessions offered, plus the Japanese Tea Ceremony session also offered a meditative approach through its emphasis on chado (the way of tea).

Again, I feel this is may be a sign of immaturity in the market. It’s like tea purveyors can’t quite bring themselves to sell tea on its own merits—there has to be some benefit attached to it and the most obvious benefit is its healthful properties. I expect in the future there will be just as many herbal brands (and there’ll always be a place for them), but there will also be a surge in interest for Camellia sinensis on its own unflavoured, unblended terms.

Having said that, it was interesting to see a few Chinese tea specialists at the festival, namely Ms Cattea, MY Teahouse and Zensation (caveat: all run by acquaintances of mine). It’s easy to pour a sample and sell tea in this format but flavour is only one half of Chinese tea consumption, and commodification doesn’t always work well, particularly considering the price difference between 100g for a fancy blend (Madame Flavour’s Afternoon in Paris was $9) versus a premium Chinese tea (Chamellia’s Wild Ancient was $70). 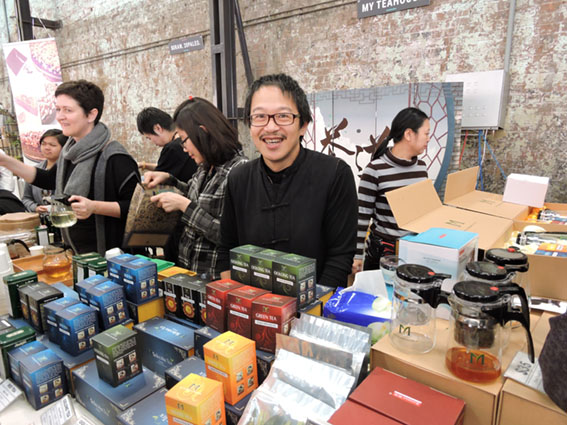 For anyone who has ever sat and had Chinese tea gong fu cha style, the social aspect and the ritual patience is a key aspect of savouring the tea and a festival environment does not provide that at all. In fact, I had to feel a little sorry for the folk at Ms Cattea; when I was at her stall, a whole bunch of festival-goers were being quite demanding about sampling different types of tea and a lot of the magic that comes from deliberate and mindful patience was lost.

When I had a chat to Christina from Zensation, she said last year she didn’t know it was going to be so busy and it was just her on the stall. “I didn’t get a lunch break or a toilet break and I didn’t get to sit down.” This year I heard the festival doubled 2014’s numbers with 10,000 tea enthusiasts walking through.

I’d be interested to hear how the Chinese tea stalls went considering how this busy atmosphere affects the Chinese way of tea and I might follow up with them and report back in a future post.

Here’s my haul from the Sydney Tea Festival: 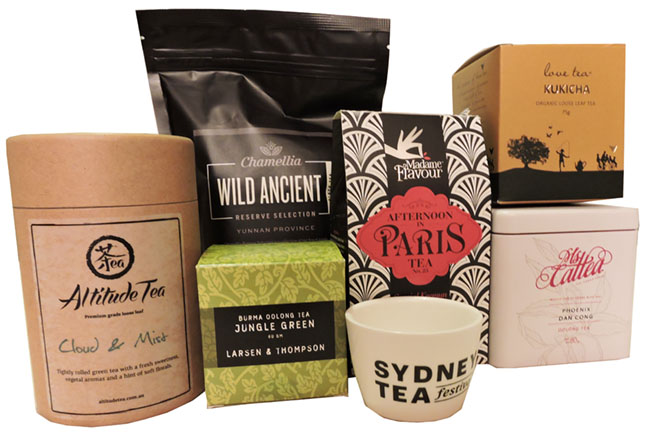 It’s a bit deceptive because a lot of the stalls I didn’t buy from are acquaintances and I already have a great deal of their tea, or in the case of places like MY Teahouse, Ttotaler and Zensation I visit often enough that there’s no benefit to buying at the festival. Bottoms up!

One thought on “Spicing it up at the Sydney Tea Festival”