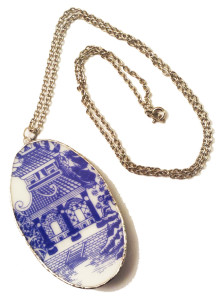 Every now and again I head up to the Blue Mountains for a spot of cave touring, bushwalking and/or afternoon tea-taking. My favourite town is Leura, which is about halfway up the mountains, approximately 100 kilometres west of Sydney.

Apart from the excellent Bygone Beautys (more on this in another post), Leura also has excellent shopping, from its cute little vintage stores to the regular markets operating out of schools and church halls.

One such fair is the Country Women’s Association Hall Markets, which occurs on the 1st and 3rd Saturday of each month. I bought this pendant from Michael Wilde, who is one of the artisan stallholders there. Michael is a gem cutter and polisher who works semi-precious stones into large pendants. One day he discovered he could do the same with porcelain and ceramic items, which then led him to hunt down vintage crockery to turn into jewellery.

The pendant, above right, is from a Westminster brand plate made in Australia from the 1950s to about the 1980s. I like it because the pagoda reminds me of the teahouse at the Chinese Gardens in Sydney, which is why I call it my Westminster teahouse pendant. In reality, the pagoda is probably not really a teahouse but the residence of the characters in the Willow Pattern story or a temple. Still, when I wear it I feel like I’ve won a medal for drinking tea, smashing plates and eloping or something.

Below is the kind of plate from which the pendant is likely to have come. One of the signature designs of Westminster is the mismatched patterns on the pagoda doors. 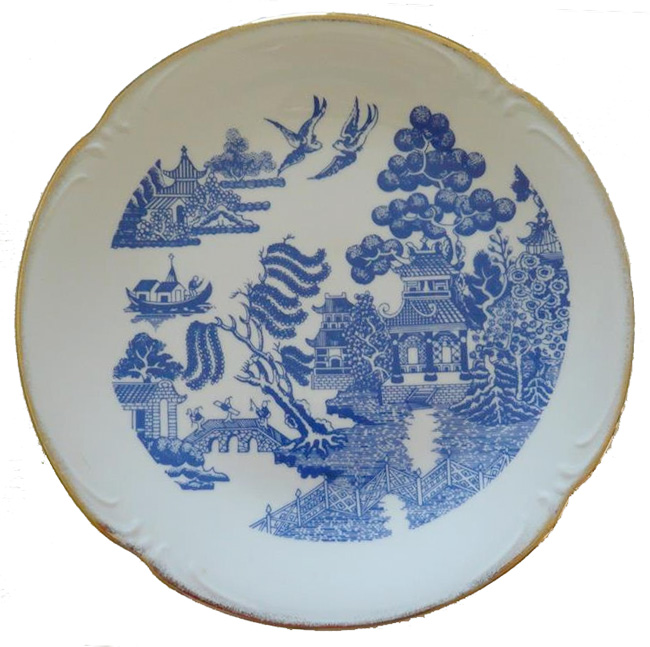 Each jewellery item is unique because all the source plates are different, some of them from more prestigious houses like Wedgwood and Royal Doulton. I did ask Michael how he knew he wasn’t destroying something truly precious and he said he has educated himself on the value of his purchases for destruction.

*I should note I am in no way affiliated with or engaged in a continuing commercial relationship with Michael Wilde.

One thought on “The Westminster teahouse pendant”