What’s with the teabagging in Fifty Shades of Grey? 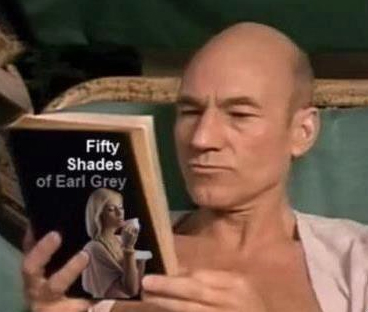 I’ll be honest and say that I haven’t read the book and I don’t intend to see the movie. Not just because all of it looks so soul-crushingly bad—I have been known, after all, to read trash both for research and voluntarily—but I now recognise the errors of my youth and realise life is short and I’d prefer to spend it reading something on my to-read pile rather than invest in words that a lot of people I trust have unanimously condemned as a waste of time. Friends don’t let friends with brains read EL James etc.

My associates have read EL James’ (in)famous trilogy (or perhaps just the one book…) and have critiqued everything from the laughable sex and the affront to feminism, to the limp descriptions and poor sentence construction. I, based on the snippets I’ve happened upon on the web, will now critique the tea-making.

The Baffler ran a piece called ‘Fifty Shades of Late Capitalism‘, which looked at the way in which the books show a fantasy of class ascension. One of the ways in which James drives home this point, according to the article’s author Heather Havrilesky, is with the (over)use of interactions with servants.

From ‘Fifty Shades of Late Capitalism‘

I was horrified—HORRIFIED—that anyone who had servants would get them to bring a paper cup of hot water and a separate tea bag and dare—DARE—to call it tea! Surely if you were so damn rich and so damn sophisticated you’d bloody well get yourself a tea sommelier or at least put Sawyer through a tea-making course. Loose-leaf in a porcelain cup, darling, you should try it.

Then as I was trying to find the above reference to offer to you, reader, I happened upon a hilarious takedown of the book by Cassandra Parkin outlining the 50 things she found annoying about the book. Here’s number 48 for your reading pleasure, with a bonus image made of gold: 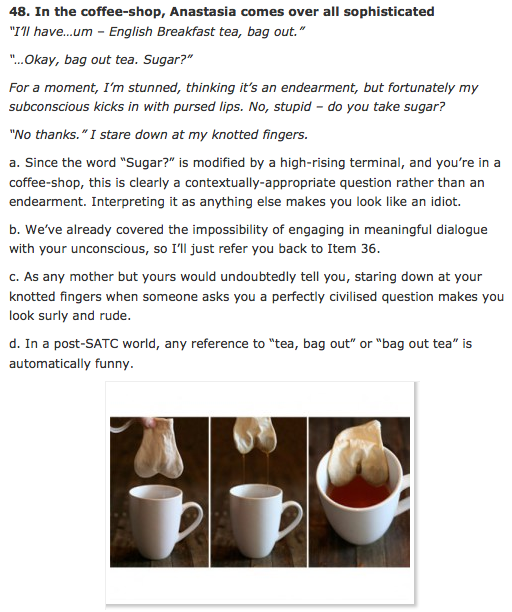 From ‘Fifty things that annoy me about Fifty Shades of Grey‘

So what’s with all the teabagging in Fifty Shades of Grey? Hasn’t EL James ever had a decent loose-leaf cuppa?