All the tea in India…

…that I experienced on my three-week jaunt there. 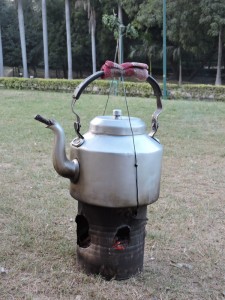 I was told there would be a chai wallah* on every corner. As with many things one hears about a new and strange culture, this would turn out to be not so much a lie but a half-truth, an exaggeration.

My boyfriend Boff and I were holed up in a 2-star hotel at the arse-end of Karol Bagh in Delhi and there was nothing there but stray dogs and minor shrines and probably the third most horrendous traffic I would see in India thanks to DB Gupta Road (the second worst was New Rohtak Road in Karol Bagh that took 15 minutes to cross and I almost got run over by a bus—don’t tell my mum—and the worst was Bhairon Marg feeding into Mathura Road near the zoo, which we actually hired a tuk tuk to cross). No chai wallahs, no chai, just a wonderful brew of Formosa Bonita oolong (bought from Cuppa Cha at home) that I made in the room using the unglamorous method of heating mineral water in my glass flask using the portable kettle element my mum lent me for the trip.

It was not until a few days later, at Lodi Gardens, that I would encounter my first chai wallah. He was selling chai and packet chips. Although he declined to have his photo taken, he did let me photograph the special kettle all the chai wallahs carry around to keep the tea hot (see right) even though I was stuffed to the brim from lunch and didn’t want chai.

Later on, as the sun set, he and his colleagues gathered at the foot of the steps to Bara Gumbad laughing and joking around a ring of kettles with their flames extinguished, the work day done. It was heartening to see the camaraderie and, after meeting more chai wallahs on my journey, I began to think that making and selling chai was considered a pretty good job by those who did it for a living.

Of course, the easiest way to see a chai wallah is to catch a train as there are not only chai wallahs at the station offering a five-rupee cup (AU$0.12) but vendors on the train itself calling “chaiii” each time they pass through a carriage. For this convenience you can expect to pay twice as much. That’s right, 10 rupees (AU$0.24).

*In India, a ‘wallah’ is a person who does a specific task; a chai wallah makes and sells chai. (‘Walli’ is the female form of the word eg chai walli.)

The finer teas in life 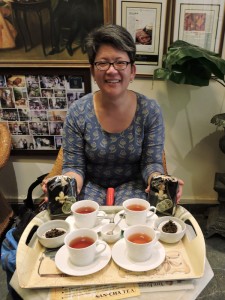 It was our first full day in Delhi and we were supposed to visit Akshardham, a Hindu mandir. When we got there, however, we discovered it was closed on Mondays. Boff, apologetic about not checking on such details, then gave me free reign for the rest of the afternoon. We were dressed nicely because we were supposed to be visiting a religious monument, so not wanting to  waste the attire, we hopped in a tuk tuk and headed to the Taj Palace Hotel in Delhi for high tea.

Since the bombing of its Mumbai hotel, Taj now has a security screening for every visitor that enters Taj property. This includes a floor mirror scan for bombs under cars, bag x-raying and metal detection gates. Apparently tuk tuk is not the usual way one arrives at a Taj Hotel because the guy holding the floor mirror couldn’t figure out where to look for a bomb under our tuk tuk.

While I did enjoy a cup of chai (or 18) every so often on my trip, those who know my tastes know that I’m moving away from tea blends and towards more purist (for want of a better word) tea experiences. Though the food at the high tea was not great, thankfully the tea was sensational. I had Margaret’s Hope and Victoria’s Peak (both first flush Darjeeling teas) with the food—drinking Boff’s share as he doesn’t drink tea—and Wah, a Kangra tea, to extend my afternoon of refinement.

This experience I repeated on a smaller scale some days later on our way to the bus stop to go to Qutub Minar from the Red Fort in Delhi. Right in front of the bus stop, as luck would have it, was San-Cha. While I did have a hard time convincing Boff it was a complete coincidence, he let me sit down for half an hour to sample some tea.

I chose a summer and autumn pick Darjeeling to compare (you may notice in the pic at right that I’m drinking Boff’s share once again) and ended up relishing the freshly processed, recently delivered autumn harvest, a pricy 1,200 rupees (AU$25) for 100g but where else would I get to try and buy it?

When we left we caught a bus immediately so I was really winning on timing.

In velvet and gold thread

It was a good call in the end. Everywhere else I bought tea (okay, that one spice shop in Udaipur) I was not allowed to open the packet to sniff the contents, let alone sit down and have a chai wallah brew it properly for me to sip lovingly. I ended up buying 100g of Golden Tips Nilgiri tea ‘nose blind’, just out of interest.

All the tea in India that I saw for sale, and that includes the stuff in gift shops that I didn’t buy, came in either an embroidered pouch or a velvet pouch, except for that one time at the Taj Palace when I bought a fancy wooden box of tea and prayed it would get through Australian Quarantine (it did).

Apparently if your tea is not in a velvet pouch it’s just not worth trying to sell to tourists, such that one of the benefits of buying the tea, as advertised on the pack, is the pouch itself.

While you are waiting 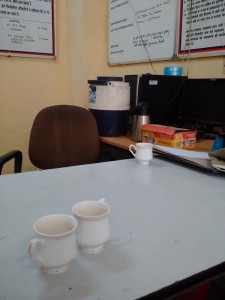 We were only a couple of days into our trip when someone stole Boff’s phone on the Metro. He had his Metro card in a slot of the phone case, which is why he had it in his pocket ready to get out, but the train was so crowded we had to push to exit and it was swiped a second before the doors closed.

It posed a couple of problems: one, a few layers of bureaucracy to exit the station as he didn’t have a Metro card; and two, a dash back to the hotel so he could use my laptop to change all his important passwords.

Later on it occurred to him that his identity (via his passport) was associated with the SIM so he decided to file a police report in case the thief used the phone to do nefarious things. This involved lots of different people pointing him to other people at Karol Bagh Metro and then we ended up at Rajouri Garden Metro, where a completely new set of people pointed him to other people and eventually we tracked down the Delhi Metro Police Station. When I say ‘we tracked down’ I mean a cleaner was ordered by the Metro security contingent to lead us down the block to the exact building. One hour down at this point.

At this point we were offered tea, and not in the flimsy disposable plastic cups that everyone else in the station seemed to have in hand, but in fancy porcelain cups. The chai wallah didn’t notice Boff’s refusal so of course I took it upon myself to drink his tea to appease our hosts. I know I wrote about chai wallahs at Lodi Gardens earlier on, but I didn’t actually drink chai then—this police station chai was the first I had in India. It was heavy on the ginger, sharp and spicy—very pleasing.

Our time at the police station totalled two hours, but in that time I had three cups of chai. Bureaucracy = 3: Chai = 3. Let’s call it a draw.

Not my Nescup of tea

Good coffee is not big in India and I know this because Nescafe is considered a premium brand. Unlike Coca-Cola, which has entered the hot beverages space with its sub-brand Georgia (featuring push-button machines for hot drinks, including chai), Nescafe does not have anything beyond its soluble coffee.

But Nescafe cups are seemingly everywhere. Even train station chai comes in Nescafe cups! Or does it? Because if you don’t look closely you’ll miss the joke: they aren’t Nescafe cups, but rip-offs. 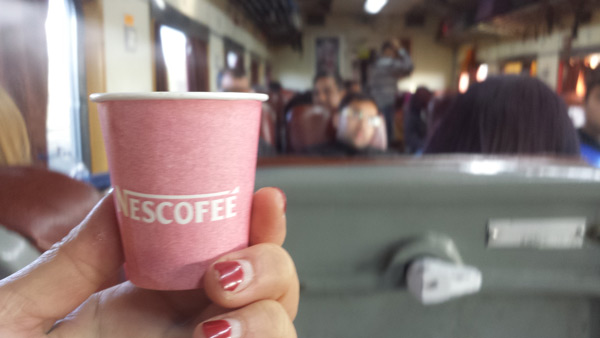 I only regret not noticing sooner because it would’ve been great to have a collection of as many different versions of Nescups as possible.

Thanks for reading my random thoughts on tea in India. Below is a slideshow of my trip in tea. Unfortunately the slideshow skimps on the captions so if you want to know what the hell these photographs are of, go direct to the album All the tea in India.