It looked like 2018 might be the Year of the Butterfly-Pea, that ubiquitous blue tisane that turns purple with a squeeze of lemon juice, which has been all the rage over Instagram these past few months. In fact, only one stall (My Blue Tea) used it as their main sell, with each vendor doing their best to differentiate their offering.

Second to that was mixology, primarily blending tea with other ingredients, but also the increase of alcohol brands combining booze and tea. At the low end, kombucha, working up to tea wine, Longleaf tea vodka and Archie Rose gin for tea cocktails.

Camellia lovers had a thirst for the light side, with white tea proving unexpectedly popular, though the floor was dominated by specialty blends. 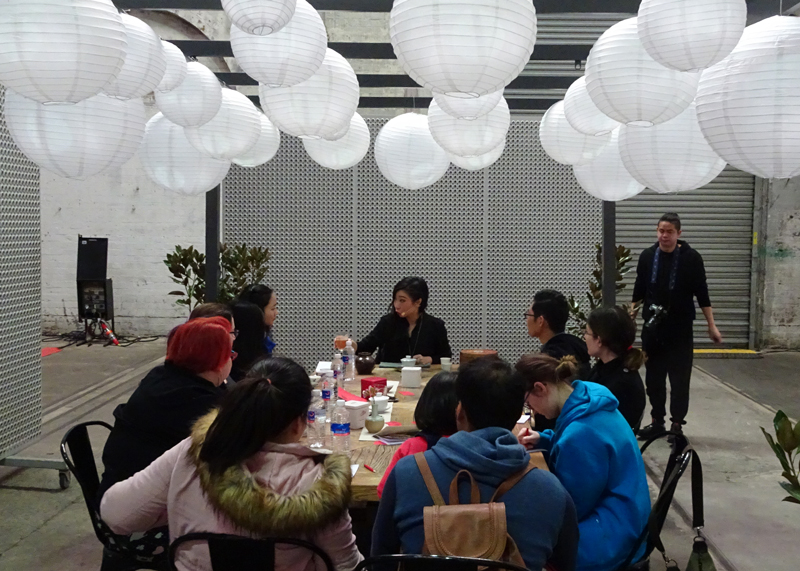 Most heartening to see was that the masterclasses sold out, indicating that tea lovers are indeed looking for a way to level up on their tea skills and knowledge.

Overall it was a very well thought out festival. The organisers listened to previous gripes and provided a cup-washing station (no more mixing chai and da hong pao!) and the stalls were well spaced, which meant although there were crowds, people could dissipate more easily rather than get bottlenecked in one row.

They also spaced things quite evenly with different activity stations – the masterclass area, the lecture theatre/tea blending station, the workshop area and the food truck hall – in the corners so that people would move all over and no vendor was disadvantaged by location.

Just one complaint: they need an extra block of ladies’ loos. The inside stalls constantly had a massive line and the outside ones, though the line was shorter, by the end of the day only had four stalls out of six in order.

I spent most of my time inserting my face into my acquaintances’ line of vision to say ‘hello’ (actual talking was well nigh impossible because of the crowds – besides, I didn’t want our chit-chat to lead to them missing an opportunity to build a new relationship with a customer) as well as running a tea-drinking habits survey for AUSTCS.

The two most interesting morsels of information that came from these question was the fact that people drink tea all day every day and that they acquire new information about tea via vendors. There’s a pervasive belief that because of its caffeine content, tea is a ‘daytime only’ drink, but plenty of people said they drink tea in the evenings. We need to upturn that, not just with tea cocktails (hello!) but with teahouses open late to revivify Sydney’s night life sans booze.

The vendor information response was also a surprise. I would’ve bet any money that social media would be the primary way people found out more about tea but so many respondents say they physically go to a shop and talk to store assistants as well as sign up to brand newsletters (less common). This means it’s imperative that the people serving customers in stores are educated and can pass on accurate information. Hard to know how much of it is unbiased, too.

Tania (Cuppa Cha) was heading back to Melbourne on the train but had a couple of hours to kill before she had to be at Central so I took her and Michael (Cha Crusade) to Topotea for a debrief/comedown session with Shane. It was nice to chat and sit and drink – three things I hadn’t really done all day – and isn’t that what tea’s all about?

Parts of this post were initially published in the AUSTCS 26 August newsletter.